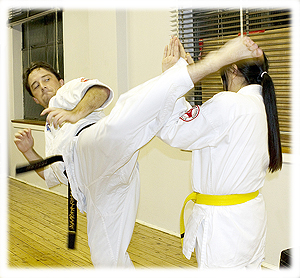 Senpai Ben has been training with Sensei Shah since 1998, when he was 12 years old. He was Kuro Obi dojo's first black belt graduate and helps with teaching in class when it gets too big or the grade distribution is too wide. He received his second Dan in March 2013. In 2016 he decided it was time to dedicate himself a bit more to other priorities for a while, but has said he intends to return to karate soon.

He has competed extensively in tournaments, including a number of full contact events, is a qualified non-contact referee and judge in the IFKKA, and a Class A International referee and judge with the Australian Martial Arts Championships.

In 2014, he accepted the position of AMAC NSW Technical Commissioner, responsible for training and management of AMAC NSW judges and referees. He also participated in the IFK World Kata tournament in Belgium in both the individual and team events.

You might want to have a look at a short pictorial biography of him from when he started training to when he got his black belts.