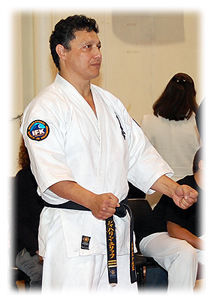 Shihan Shah got his first taste of Kyokushin at the age of 14 while he was living in Iran, where his father was posted as a diplomat. The family later moved to Singapore, where he again started training Kyokushin under Shihan Peter Chong.

In 1991, at the age of 31, he started yet again, for the third time, under the then Sensei Doug Turnbull, and finally got his black belt almost 25 years after he first started, and he has been training in Kyokushin karate continuously ever since.

He started teaching Kyokushin karate in 1995, when he started teaching at Newtown North Public School while still a brown belt. He is now the chief instructor for Kuro Obi Martial Arts, and personally teaches most of the classes.

In September 2015, he received his 5th Dan black belt  from Hanshi Steve Arneil, under the auspices of the International Federation of Karate.

Since 2017 he has been the President of IFK Australia Inc, and has been working hard toward the promotion and development of the organisation.

Included among Shihan Shah's achievements and qualifications are:

In his non-karate life, Shaharin Yussof is the oldest of 6 children, with a Malay father and a Swiss mother. Due to his father's profession as a diplomat, he has lived in 14 countries, and speaks 6 languages more or less comprehensibly. He has a both a Bachelors and a Masters (by research) degree in Electrical Engineering.

He started teaching Kyokushin in 1995, and before starting as a full time instructor in 2011, he was a Professional Officer and IT support person at UNSW for 20 years.

He has two adult children, the older of which is Senpai Alexander, who got his Kyokushin black belt at the age of 17. Senpai Alexander is no longer training due to other life interests.

Check out his Instagram sites for his woodwork and his general photography.