Kyokushin karate officially came into being around 1964. Its founder, Sosai Masutatsu Oyama, had been developing it since the early 1950s, having initially trained in Kempo as a child, then in Shotokan under Gichin Funakoshi (generally recognised as the father of modern karate), Goju Ryu under So Nei Chu, and Judo.

It rapidly gained in popularity, to the extent that it currently has over 12 million practitioners worldwide. It soon became known as The Strongest Karate, not only because of the incredible feats of strength and endurance that Mas Oyama performed, but also because of the rigorous requirements of the training and tournaments - i.e. the karate is also strong, not just its practitioners' bodies and minds.

Kyokushinkai means The Society for the Search for the Ultimate Truth. 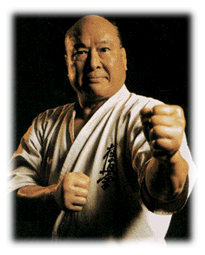 Mas Oyama passed away in 1994, and Kyokushin broke up into a number of politically fraught Japanese groups, all claiming to be the true successors. His daughter, Kuristina Oyama, continues running the original organisation, known as IKO - Sosai, dedicated to his true legacy, yet even there, there are issues.

In 1991, Hanshi Steve Arneil, having been one of Mas Oyama's premier students, and at the time already 7th Dan, decided to strike out on his own. He formed the International Federation of Karate (IFK) which is based in the UK. Hanshi Arneil was the first person to undergo the rigorous 100 Man Kumite - 100 full contact fights in one day - which set a precedent for all others to come.

Less than 20 people world-wide have since completed them. More information can be obtained from Shihan Shah's original website - Australian Kyokushin - which was started in 1994 and is the oldest existing Kyokushin website in the world.

Hanshi Arneil still calls his karate Kyokushin, and teaches it as he was taught originally by Mas Oyama.

In July 2011, by a resolution of the IFK International Country Representatives meeting, held in conjunction with the 3rd IFK Junior World Tournament in Crawley, UK, Hanshi was awarded his 10th dan.